H/t to my brother on this one— he played me this record. This is from the title track of Betty Davis's album Nasty Gal. Davis (*née Mabry) was married to Miles Davis in the late 60's, when she influenced him to revamp his music and image, before going on to make a few records of some of the most outrageous funk ever. Drums are by Semmie “Nicky” Neal, Jr., who I've not heard of otherwise. I've written out the opening of the tune, with the two measure groove, with repeating fill, that he plays for the bulk of the tune, as well as the three drum/vocal breaks, and a sample of the ending groove: 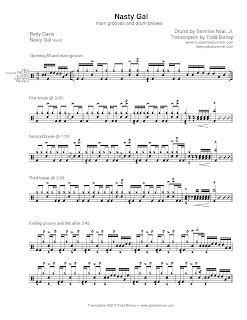 This is a great lesson on how to play fills in funk— that is, at an even volume with no drummery BS. There's a good review of Davis's first record here, with background on her relationship with Miles.

Get the pdf | get music by Betty Davis

Audio after the break— you want to hear this one: