I don't get how herds work: suddenly everyone, everywhere is talking about four stroke ruffs. They happen to be all over this piece, played in 16th note triplet form on the snare drum, and especially played down the drums, ending on the bass drum— a very popular lick around 1970. Ian Paice, the drummer here, didn't invent it, but he plays them so much I've started calling them Ian Paice Specials. What the hell, maybe it will stick. Why not?

This performance is an early favorite of mine, from about when I was in the 8th grade, ten-ish years after the record, Burn, by Deep Purple came out: 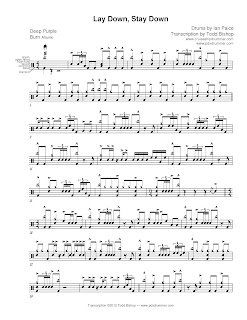 I've transcribed up to the opening vamp of the guitar solo; most of the heavy playing happens before that. The hihats are played half-open or open all the way through. There are a few spots where he moves to the ride cymbal, which you can pick out; it's not that important.