Let's see how many of these I can do in coming weeks; I've always loved the way Frankie Dunlop plays the heads on the Thelonious Monk records, so here's Hackensack, from the album Criss Cross: 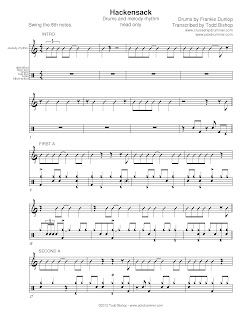 On the top staff I've given the rhythm of the tune, and of Monk's intro, so you can see how Dunlop's playing supports it. He plays melodic, swingy punctuations on the drums with a big sound, while sketchily rendering the time feel; the cymbals are played fairly lightly, with no big punctuations-- he doesn't actually crash on them here. He mixes up his playing a bit between the ride cymbal and the open hihat, but it can actually be a bit hard to distinguish, and since they both fulfill the same function, I haven't attempted to sort out which individual hits are on which cymbal. He does play most of the last A on the hihats. He tends to leave a little space on the first measure of each phrase, and doesn't do the obvious things at the big changes-- at the bridge (at measure 25 of the transcription) or the beginning of the solos-- he does fill into the change, but he doesn't play a strong punctuation at the barline, or kick immediately into a more driving feel.