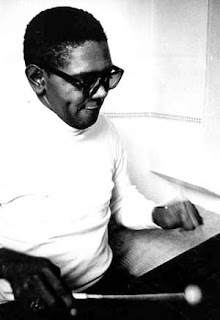 Since we're doing a lot with Ed Blackwell lately, here's a little snippet from his November, 1981 Modern Drummer interview by Scott K. Fish, in which he discusses his 1967 and 1968 tours of Africa, and the influence they had on his playing. It's interesting that he felt he wasn't able to retain the specifics of the music he heard, and had to rely on his impressions to bring it into his playing.

Not that he didn't already do something similar; he was exposed to African-derived rhythm and drumming for many years in New Orleans, and it was a mature part of his playing before he ever went to Africa, as David Schmalenberger reminds us in his massive research project about him. But even with that prior exposure, what he heard in Africa clearly made a big impression:

SF: I've read that you felt your trip to Africa freed up your drumming.

EB: It did. I learned that the African drummers play a rhythm in such a way that it's continuous. Individually they were very simple rhythms that would become complex when they would merge. But if you had the chance to walk around the group while they were playing, you could see each cat playing a different rhythm. It was a very simple rhythm that they played, but when you hear the overall thing . . . man! It reminded me so much of the way the guys used to play in New Orleans. In fact, by going to Africa I was able to really dig how much the African culture was maintained in New Orleans as far as their funeral parades. In Africa, when they have funerals, everybody dresses up real colorful and after they're through with everything they have dancing and a big celebration! That was the same thing in New Orleans. They'd march to the graveyard with the body and they'd put the body down. Then they'd come back dancing! Africans, I guess, had the concept that death brings on another life, so it was not anything to be sad about. It's just that the soul is gone to another life. That's the same concept they have in New Orleans. I didn't realize that until I went to Africa and I was able to reflect on the way the funerals were in New Orleans. We had a chance to see a couple of funerals in different places in Africa. The people were just dancing and everything. It wasn't this weeping, wailing and crying. It was happiness. You couldn't tell the relatives of the dead person from anyone else. Everybody was happy.

SF: Did you get a chance to talk with many African drummers?

SF: Did you start to incorporate African rhythms into your drumming?

EB: Of course. But there's only so much you can retain. I was able to tape some of the stuff on my tape recorder until I ran out of batteries. It was difficult finding batteries around Africa! Some of the things I taped I was able to retain, but after traveling to so many different places, you hear something new and it would just wipe out what you'd just heard. I was exposed to so much stuff that I was able to retain very little . I was able to retain the overall effect of the African drummers as far as how the rhythms would affect an individual, and how to try to relate my own rhythm to that way of playing. But that was all I was able to retain.


Continued after the break, with some audio:

SF: I've read statements like, "Ed Blackwell is a walking encyclopedia of African rhythms." Was there ever a conscious effort where you decided, "Let's see how I can break down these African rhythms and apply them to the drumset"?

EB: I have some African rhythms that I do that with, but there are so many more. I have a book of African rhythms. You look through that book and see the rhythms. There's very little that you can just convert over to your own way of playing. You have to get the overall concept of what they're doing and relate it to whatever you have to play with. That's what I did.

Listen to part two of Magic of Juju.

SF: What about those rhythms you play on cowbells?

EB: A lot of that is my own stuff, but there's a couple of rhythms that I heard and retained. There's a rhythm on cowbell that they call Amagello that I learned from a guy in Ghana. I use that quite a bit. Most African rhythms are written in 12/8. The main African cowbell beat is 12/8. You can adapt that to a lot of different things. Most of the things that Africans play—you would have to spend much longer than three months in Africa to really retain an overall concept of how they do the different rhythms because there are so many. It's an endless thing the way they change them and the way they apply them to different drums. They have a family of drums. A male, female, son, and daughter. Ac-Tu-Pa is the main drummer or the lead drummer. He plays the lead rhythm and the other drummers play according to what he plays. He might go into a different rhythm and then the whole thing would reverse and go into something else. The other drummers know when to turn it around just from the rhythm that the lead drummer is playing. It's amazing. The drummers do it all together. So you have to really spend a lot of time hooked up to that to retain exactly what they're doing.