"If I think of something beforehand then I should not play it." 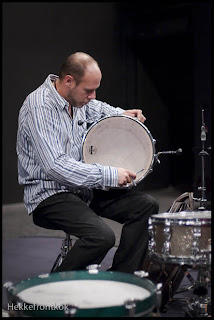 Pianist George Colligan has posted a really great interview with drummer Jeff Ballard on his blog, Jazz Truth. It's really hard to excerpt anything from this because it's all so good; I put in a few ellipses at the beginning to pull the salient points and then gave up. Just go read the whole thing-- this is about 25% of it.

GC: Can you talk about the difference between technique and music?

It’s a tool, it’s not an aesthetic [...] and I think that some folks confuse them. And I think it comes from the fact that in this day and age we have accessibility to lots of technique. It’s not something, in a way, that you kind of earned.

Before, I think you earned technique, you earned it by discovering secrets… like how does Dizzy get some sort of fingering, or Art Blakey’s got a certain kind of flick, a certain kind of way of playing a shuffle that no one else plays. [...] And so someone has to go out and earn it [by listening and watching] rather than just get it from a book or a Youtube video. I think there’s something in the effort that you have to give to get that technique, which connects it to the making of music rather than just getting the ability to play something. [...]


GC: Do you think a lot of drummers get hung up on technique?

JB: Yeah, I think it’s kind of the nature of the instrument. Same with saxophones or the guitar, maybe, those kinds of things where the technique is not so difficult to get to. You can sound impressive just by having some technique on those instruments. It’s a hazard area.


More after the break, but really go read the whole thing.

GC: How would you advise a young drummer to get past that? To think more musically?

JB: That would be the answer. If they can think more musically, then the technique is at the mercy of what’s musically asked for, it’s not reversed. The music is not choked and pushed and pulled into shape by the technique. The technique is not dictating how the music is, the music is dictating. Like Art Blakey coming up with a shuffle, the way he felt it is dictating what his technique will be so that he can achieve what he wants. So if you can keep at the forefront of your mind that this is at the service of the music you’re playing, not at the service of your ability. You’re not trying to prove your ability, you’re completely surrendered to the music. It tells you what to do. And I think cleaning it up, and playing it as well as you can is the technical aspect of it. Rather than think of technique as how many beats per second can you play multiple strokes in one hand, for example. Or if you can play one time against another time. I don’t care. I tell a lot of people this – I don’t care what you can do, I care why you do it. That’s to me is what’s most important.

On dues-paying gigs, and on playing as a group:

GC: How would you advise a student to make it through the gigs that are not necessarily a “spiritual experience”?

JB: Pick elements in the music that you can work on. Like if it’s a dance beat or something, make it the most exact, baddest, super funkiest backbeat that you can, with the best intention of playing that way. If you’re playing "Have You Met Miss Jones", and they’re playing in a very straight way, don’t try your stuff. Make that tune, the way it’s being played, as best as you can, as you feel it to be in that way. You can learn from that. If you always try to put your own spin on it, I think it’s – I don’t know. I don’t agree with that. The music’s not really asking for it in this situation that we’re talking about. If you know that that’s the way these guys play, you must make the music like that. If you don’t then you’re outside of the music and you’re in your own band, it’s like you’re a different band up there. It’s very often that I hear young groups of four or five people and it sounds like four or five different bands up there. Everybody’s got their own agenda, or everyone’s worried about making sure they get their agenda taken care of, when really it’s all together. It should be all together. Like eighth notes, when they’re swinging their eighth notes, that could be very close to being the same. And horn players, you’ve got to leave room for the rhythm section to comment on what you’re playing. That will give you ideas. If you’re playing a solo and you want to be solo, okay, well we’ll stop playing. You’ll be “solo”, you’ll be alone. There’s your solo. You’re not alone. So don’t forget that. I don’t care what you’re playing.


GC: So when you get onstage, you have no agenda?

JB: I hope not. I try not to do. I think I do and I try not to have it. And when I find it getting there, meaning I kind of smell a rat somewhere, I would definitely stop that. I’ll stop it. Go to the music, it will tell you what to do. If you try to tell it what to do, I can’t get behind it as much. I can’t get behind it with as much faith. If I think of something, if something comes to me, I can get behind it much more easily than if something comes to me and…“I’m going to put it in”. If I think of something beforehand then I should not play it. If I find something to play, if I encounter the thing to play, I can really trust it because it came to me without preconception, without ego needs, without limitations. It’s just there, right there, one hundred percent, clean of any kind of attachment or anything. You encounter it. Then you do. The thing with this music is velocity. Speed of thought. You’ve got to be so fast. And you’re only going to be fast when you’re super focused.