I wasn't planning on making this part of this series, but it happened to come up. I was prepping for a recording session today which will involve a couple of tunes in 7/4, and I played a few pages of Even in the Odds while singing/humming/thinking the vamps from the tunes we'll be doing. I want to go into the session with my hands feeling well prepared to play easy stuff at the tempo of the tunes, so I improvised a few very basic changes to the written grooves. In keeping with the current series, I wrote out the examples in 5/4. These work best at brighter tempos: 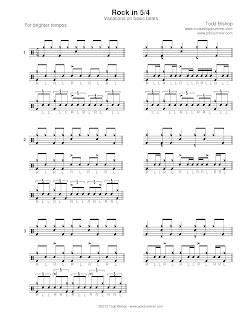 The pattern to the variations should be clear, I hope. I played the right hand on the hihat for the first beat of each series, and then on the ride and crash cymbals on the variations. Notice that the cym/hh part on the first variation of each series is in 2/4+3/4-- you can also reverse that to make 3/4+2/4. Another thing I did was to improvise ghost/filler notes on the first and second grooves of each section.

Again the idea is not to play hip crap, it's to get your hands doing basic things perfectly in time, while giving you a feel for the shape of each measure of music in this time signature. As you can see, the triplet variations are a little irregular-- a single scheme doesn't work for the examples I've given. But since we're not doing this for reading practice, you can take a second to figure out a sticking that will work with whatever beat you happen to be playing. If you don't own EITO yet, you can write out your own beats in 5/4 with which you can run these variations. Start simply-- with one bass drum and one snare drum note per measure.