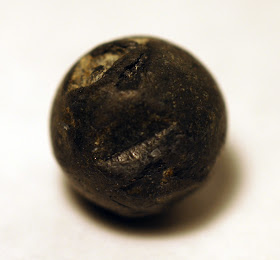 All right, people, we are going to be on really, truly, unconscionably light posting through most of the next week as I do my taxes, get it together for, and then go play the Ballard Jazz Festival, send Europe tour emails, assemble my Todd Bishop Quartet news blog, and God knows how many other things I'm forgetting. Right now I happen to be reposting stuff from the old MySpace blog, and found the following item I wrote after my 2009 tour:

OK, this has nothing to do with anything, but certain naysayers have questioned the authenticity of my Waterloo bullet [It was Willie and Dan- tb], which I bought at an antiques market in Brussels for one euro. There is of course no way to prove the thing is real, but consider:

1) Acquiring, weathering, and individually battle-damaging 5-cent lead slugs so you can sell them for a whopping single euro to the mostly-local people who come to the weekly antiques market would have to be one of the biggest waste-of-time scams ever. I'm not going to run the numbers, but I bet you could make more money for less effort by working one hour per week at Le Arby's, if such a thing exists.

2) Battlefield debris- like bullets- even from the most famous battles in the world, is not at all rare. Millions of rounds are fired during these things, and they have to go somewhere. Usually they end up lying on the ground, and barring an unheard-of spike in the value of scrap lead, there is no reason for anyone to go out and pick them up, until the passage of time makes them semi-collectible. They actually seem to be about as scarce as beer tabs at an abandoned drag-racing strip- Belgian farmers are always plowing up ordnance from past wars. The seller was blasé about them- "they find them all the time."

3) To an American who has never touched anything more than five years old, "a bullet from Waterloo" is as fanciful sounding as the skull of Henry VIII or a plume from Napoleon's codpiece, and must surely belong on a pedestal in a museum with armed security, but to someone living in Brussels it's more on the level of "oh, yah, drive out to the suburbs and you can find tons of crap like that." Considering that you can buy an honest-to-God Roman coin with a picture of the emperor on it and everything for $1 [OK, a crappy 4th-century emperor, but still. -tb], a euro for a mere 200 year old lead ball is not that big a deal.

That's just been bugging me slightly- tainting the coolness of my WATERLOO BULLET.