Transcription: Elvin Jones - Out of this World

Here's another example of Elvin Jones' "afro-waltz"- as I keep calling it- from the intro of the tune Out of this World, from the John Coltrane album Coltrane: 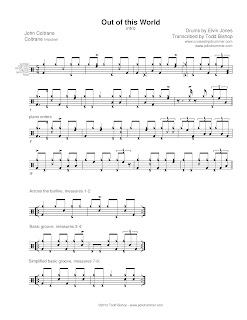 The dotted-8th/16th rhythm you see a couple of times could've just been notated as swing 8ths, but I did want to illustrate that Elvin did not just play an even triplet grid, and that many of the "organic" sounding things in his playing are actually accurately-played 16th notes. But in practicing this, you can treat the dotted 8th/16ths as regular swing 8th notes. There are other little manipulations present which for readability I haven't notated- for example some of the unisons landing on the beat are played very wide, with the hihat landing slightly before the beat, like a flam.

At the end I've isolated a barline-crossing move he does- which can help keep this type of groove from becoming too static- and a couple of examples of the basic groove- one busy and one simple- which is similar to the groove from Your Lady which I presented before, with the same 6/8 part happening between the feet and left hand, and the hihat played on the 1-& of the second measure. I've eliminated the tom moves to show the idea cleanly; you can copy the moves from the transcription, or improvise your own, or apply the moves I gave earlier.

See my book, or the blog archives for last year's transcription of Tunji, also from this record.