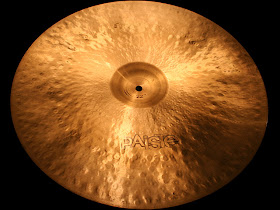 We don't write much about gear around here- there's something of an epidemic of misplaced priorities surrounding the topic. But I've been on a cymbal-buying kick the past couple of weeks- a heavyish vintage Paiste ride cymbal buying-kick, specifically. I'll be reviewing them shortly, as soon as the last one-a very rare 22" 602 Dark Ride- arrives on Monday.

Until I get around to that, here are a few entries from T. Bruce Wittet's list of the best, most innovative cymbals ever made:

1. Avedis Zildjian 20” Medium Ride: the staple of the modern drummer irrespective of era. he weight and the wide variation were such that the cymbals caught on with players diverse as Buddy Rich and Ginger Baker. This was a desert island cymbal, still is. If on your island old Ks were hard to find, you might be able to find that darker tah in an A medium. [Note: This is also Joe Morello's "Take 5" cymbal. The newer ones are much heavier than the older ones. -tb]

5. Paiste Traditional Medium Ride 20” (or perhaps the Trad 22” light proto). Forget all your Paiste 602 Medium Rides in jazz context and go for the Trad medium, or the medium-thin, come to think of it. This is the money shot. At the time of its debut, it was arguably the closest ride closest to the old Turkish-made K Zildjian with its archetypical dry tang with a rich underbelly. Although the tip was a little more brittle than certain legendary Ks, it gained that its ping without sacrificing the caw of the stick laid parallel to the bow.

7. Paiste Formula 602 Dark Ride. [This is the one I've got coming- tb] At one point, around the time when the Paiste Profiles of International Drummers was published, the 602 Dark Ride was the Holy Grail of cymbals in my opinion. It was a thick, heavy, cratered like the lunar surface owing to extensive machine and hand hammering. I first saw one in the flesh when interviewing Jack DeJohnette circa 1978 for MD (my first MD feature). Jack told me that he’d collaborated in the development of the Paiste Dark Ride, which was a rare cymbal that succeeded in combining bright stick attack highs with exotic, dark undertones. There was no trash in this one nor was there a lot of build up. I wrote to Paiste, half hoping they’d loan me one for review purposes, and one of the brothers sent me a letter stating that to enjoy fully the Dark Ride, I’d need to play thicker sticks and with considerable force. His take on me was that I’d probably prefer the 602 22” Medium Ride! Ah well. The suckers were expensive and each time I’d see one I’d be penniless, so it was probably just as well.

More after the break:


11. Paiste Formula 602 18” Flat Ride (maybe even the 20” model): Albert “Tootie” Heath, quoting another famous drummer, recounted to me the line, “I ain’t gonna play no cymbal without breasts”, referring to the absence of even an A-cup protruding proud of the flat surface. Speaking of which, I could have sworn I saw Tootie playing a Paiste flat ride but the Paiste Orange Book claims he used a 20” 602 medium, not that that book is comprehensive or gospel. For example, it claimed that Jon Christensen played Paiste cymbals, including the Dark Ride, which led me on a chaotic path to acquire one, only to discover decades later that Jon never bothered with them on all those ECM jazz recordings, relying instead on his trusty 22” old Turkish K. At any rate, the Paiste 602 flat ride may be an example of an instance in which in-house cast B20 alloy (Zildjian, Sabian, Wuhan) takes second place to sheet B20 obtained from a German supplier. My theory as mentioned in my diary was (as in the Mini-Cup, coming up shortly) protruding above the nearly level surface.

Truth is, this cymbal owed its politeness to the sheet B20 alloy as much as to the missing bell. It’s one of those instances in which the precious, in-house casting of B20 bronze (ie, the 602 series were formed from sheet B20 obtained from an outside supplier) may have been overkill. In the Paiste 602, all the elements were mixed in exquisite proportions that prompted bandleaders, who hate cymbals, to proclaim, “this was a cymbal!” I owned a couple of these and disposed of them in irrational bouts of horse-trading. They were good cymbals, suitable for creative music of all sorts, witness a drummer I inteviewed for Modern Drummer, Marty Morell, who, along with Aldo Romano, drew signature tones and expression from the flat surface, into which they’d install rivets. Marty showed me his and it was humming nicely. I own what I believe is an equally good, if not greater cymbal (by virtue of a slight bump in projection), a 20” modern K Constantinople flat…it resembles the 602 a teeny bit… but if you find a Paiste 602 in an 18” or 20” diameter, you won’t be disappointed. It makes an obscene (in a good way) dry as dust crash, incidentally. Oh yeah, the great Swiss drummer, Peter Schmidlin has used one to good effect; then again, Peter touches a tin plate and makes it sound exquisite. [Note: For a lot of people the quintessential, classic flat is the Now He Sings... cymbal, the 22" 602. -tb]

12. Zildjian Rock Ride/Sabian Rock Ride: 21”: these run neck in neck. I’ve owned both and favor neither. They are excellent. I played one with a touring guy named Eugene Smith, who’d come up to Canada from, I don’t know, Philly or Baltimore, and, although his dynamic range was vast, he liked to keep the volume down so he could pick away gently on his 4-string guitar. You wouldn’t think a first choice ride would be a rock ride but damn if it didn’t work perfectly, foiled to its right by a 20” Turkish K thin. The rock ride features a fairly high profile and substantial weight, though it’s no bullet proof plate; and the bell is wide and stands proud of the surface. The possibilities inherent in such a cymbal are endless, given it responds to a flick of a wire brush as credibly as a steady beating from a Firth 3A American Classic, with its thick throat: used to love that combo, stick vs cymbal.

18. Istanbul Agop 22” 25th Anniversary Ride: now this is the way they used to be before companies blotted the face of cymbals with silk screened logos and designations and hydraulically pressed cymbals into shape. Cymbal to cymbal variations aside, this is the old K I revered, although often couldn’t use due to inherent volume limitations. This is the cymbal lathed like the ones from the fifties, hammered like the ones from way back, and cupped with mutant, sometimes not quite dead center bells that didn’t always beckon you to play mambo. This is the real old Turkish K, in my opinion—one era of misshapen, erratically hammered old Turkish Ks (as opposed to the Stanton Moore Wide Ride, above, which is more like a 1970s Turkish K). The crash ain’t quite right and the right ain’t quite there, in your face, and that is the point.