Transcription: one hour with Live Evil

This morning I sat down with one of my favorite pieces of music- Sivad, from Miles Davis' Live Evil, with Jack Dejohnette on drums- to see what I could do with it in a reasonable amount of time. Fourteen measures in sixty minutes, it turns out. The stopping place is arbitrary- there are four more hell-of-notes measures until the horn comes in, and I knew it would take me another half hour to get them, so I figured that was enough for one post. 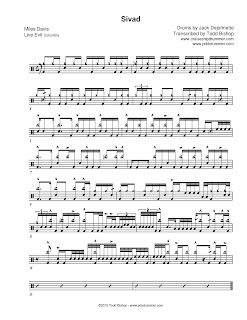 You can make the opening little crescendoing half note roll plus swing 16th on the BD yourself. Play the drags as 32nd note doubles. The 32nd sixtuplets appears to be doubles, and most of the remaining 32nd notes are likely singles. I think. Do what works best for you.

I've been playing with Charlie Perry's Beyond the Rockin' Bass book recently, and it reminds me a lot of Dejohnette's funky playing on this record- it's a lot of fun to work with.