Batucada on the drum set

We haven't done anything new with samba in awhile, because I'm still digesting all of the stuff we've done previously. But here's something new that came up yesterday, using open and muffled tones on the bass drum to emulate the surdo. It would also be helpful to run the third surdo parts from O Batuque Carioca, as well as my bossa bass drum variations, and the standard dotted-8th/16th samba pattern with this. This feel combines well with samba cruzado, which we've discussed before. 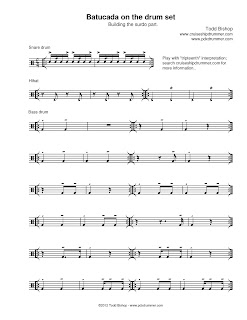 Notes:
- Play the snare drum with the "tripteenth" feel; the '#' and the 'a' of each beat of 16ths line up almost exactly with the first and last notes of a triplet. Play with or without the buzz on the 'e', with sticks or brushes.
- Use either hihat pattern. The second pattern uses a closed note on beat 1, and a splash on beat 2.
- Play staccato bass drum notes as a dead stroke- bury the beater in the head to make a muffled sound. Play the tenuto notes as an open tone, allowing the beater to rebound. This works best with a drum with little or no muffling.
- Bass drum patterns with rests are preparatory studies. Patterns without rests are performance patterns.
- Also substitute dotted-8th/16th rhythm for the 8th notes or the 16th-8th-16th rhythm on the performance patterns.