This is a permanent favorite of mine- Good Old Funky Music by the Meters, with Zigaboo Modeliste on drums. Not a single day goes by without me hearing this internally at some point. There is another version of this floating around; this is the shorter of the two- here they've edited out half of the intro, and I like it a lot better- it puts the Hawaii 5-0 fill right up front. 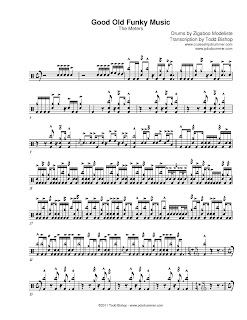 YouTube clip and a few notes on the transription after the break:

- The odd measures- 2/4+3/16 and 1/4+3/16 are the result of studio edits, and the time signatures reflect the actual length of the space. I can't imagine that is the way the music was conceived by the performers.

- I haven't even tried to figure out what's going on sticking-wise with measures 12-23- I just wrote down what I heard. You'll have to figure out a way to play it that works for you. It seems likely that he's bringing both hands to the snare drum for part of that.

- With the hihat there are several gradations between open and closed, which I haven't attempted to capture. The closings (with the foot) are mostly not audible, so I haven't put them in either. Give it a few listens through to get an idea of generally how he treats it.

- Note that the fills in measures 10 and 11 swing somewhat.

- The wacky-looking fill in measure 15 is a simple 3:2 polyrhythm, with 16th note triplets over 16th notes.