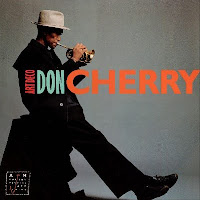 I guess I could've called this Higgins and Haden. These are four records from what is for me the classic phase of Higgins' career in terms of his sound- he's got that heavy-ish rivet cymbal and floppy snare drum sound, and is nice and present in the mix. The advances in recording technology since the classic Blue Note and Ornette records of the 50's and 60's really agree with him, and his delicate touch really communicates. There's also a sense of a new level of mastery in his playing- it feels as natural as breathing.

With Higgins and Charlie Haden. Word is that Metheny wasn't thrilled with this record- he thought the band played better on other occasions. We'll have to take his word for it. It's hard to pick a favorite track from the first side; I think the wash of brushes on Lonely Woman is the star of the show, though.

Cherry and Higgins plus Charlie Haden and James Clay. One of the most relaxed and unpretentious drum performances ever- I wish more people would emulate that. Tunes include Cherry's Art Deco, Bemsha Swing, When Will The Blues Leave, Body & Soul, and The Blessing.

The Rejoicing band together again. I guess people don't dig Redman at this early stage of his career, but that doesn't matter- it's a great ensemble performance. Moose the Mooche is the standout, along with some nice originals I don't know the titles of.

This is an older record than the others, and very much from the 70's- quite clearly- I mean to tell you there is no ambiguity whatever on that question- none. Like doing macramé at a Bahai temple while tripping on LSD, I imagine.