Following up on my earlier post on feel in samba, here I have gone a little further in analyzing what's going on with the repinicado/"tripteenth" (Michael Spiro's term, I believe) thing in samba, and have put together a little method for varying the accents without losing the feel. Once you get the concept, you may not need to see it written out like this, but it does help some people. It's important to bring it back around to conceiving the rhythm as an interpretation of 16th notes in 2/4 or 8th notes in 2/2.

File this under "things that are about as accurate as the idea that swing in jazz is based on triplets." You have to apply some musicianship, and do a lot of listening and playing to get to where this is supposed to go. 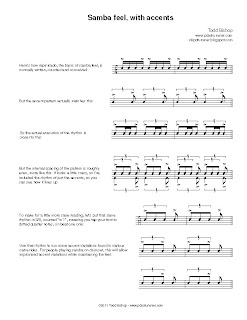 Visit my other samba posts for examples of this A drum set student who was really, really into samba and wanted to develop a lot of facility with this sort of thing might also apply the first thirteen Stick Control stickings to the 3/8 exercises, Accents and Rebounds