Well, we're all samba all the time around here these days, but what the heck- the point of this enterprise is for me to post things I'm interested in, and working on, and right now I happen to be doing a lot with samba.

Samba cruzado is a way of playing samba on the drum set in which the left hand crosses over the right to play the toms. This is a style I resisted doing for some time, because role of the hands is reversed- the right hand does the filling in while the left keeps the "ride" part. For that reason none of my regular instinctive stuff works- you have to relearn how to make a phrase ending, how to fill in with the "off" hand. The reason for the crossing over is to compensate for weak left hands- apparently it was easier for Brazilian drummers to reverse the lead than it was to develop the left so it could play the snare parts cleanly.

What I've done here is begin to integrate the cruzado thing with the third surdo parts from O Bataque Carioca, played on the bass drum, while filling in with the right hand on the snare to outline caixa-type patterns. In batucada, the third surdo is the lead voice of the surdo section, filling out the quarter notes of the first and second surdos. 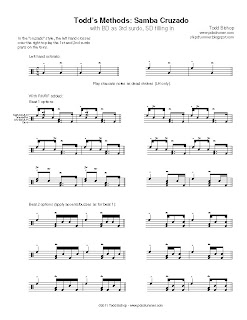 The exercises here are mostly little more than warm-ups- once you've gotten comfortable introducing the snare drum parts, do most of your reading from the O Bataque... page. It's a good idea to review the other samba things I've posted (under the labels at the bottom of the post, hit "samba") as well as Ed Uribe's and Duduka's books. And listen to and play as much samba as you can, of course.

After the break- clip of Dom Um Romao playing this style: