Here's a rudimental snare drum piece which I've been trying to get my head around for a couple of days now. Written by Ken Mazur, a champion drum corps soloist of the 70's who went on to be an instructor, clinician, and judge, as well as author of The Technique and Mechanics of Competitive Rudimental Snare Drumming, an epic ~350-page rudimental drumming manual (sorry, no link for that- the book does not seem to be commercially available- if you're interested, you should try to contact Mazur directly). He's a good writer and highly knowledgeable, with some interesting scholarly pieces which I'll be taking a look at in the near future.

He also seems to be a fairly controversial, Bobby Fischer-esque character in the drum corps community- brilliant, but personally difficult- perhaps even a little bit[?] of a crank. Maybe that's a totally unfair characterization; my drum corps world revolves around people associated with the Santa Clara Vanguard from the early 70's through the late 80's, and until this week he was unknown to me personally.

So this piece, Lazer Beam, was played by Mazur when he won the solo snare drum competition at DCI nationals in Philadelphia in 1976: 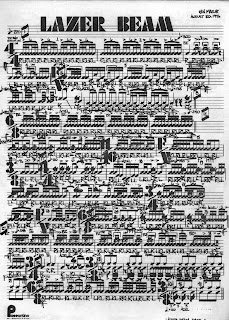 I'll give you a few moments to stare gape-jawed at that, then after the break I'll share whatever coherent thoughts I can muster about it.


So. A few observations:

Conclusion:
What is the purpose of a snare drum solo? I come with a strong bias that it should be a piece of music or a study for developing musical skills, and I think that's what is giving me problems with this, which is actually purely a vector for competition, made with an eye on advancing the history and/or craft of rudimental snare drum, and possibly for "working the refs" with an intimidating, unreadable chart.

View and download the complete piece (and lots of other great stuff) at rudimentaldrumming.com.
Todd Bishop at 10:22 AM
Share