Here are a couple of pages of caixa (that's a Brazilian snare drum) patterns which are in common use in Portland, along with some of their variations from other sources. Includes a partial illustration of the "tripteenth" (Michael Spiro's term) concept, which may be helpful in getting the feel happening. These are primarily for use in a batucada group, though set players trying to cop that style are going to want to know them, for information if nothing else. Part two will feature patterns more commonly used on the drum set. 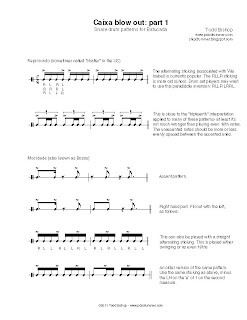 Download the pdf.
UPDATE: the Lions of Batucada, a group I performed with in the mid-00's, has their caixa rides written in tablature and posted online. Several of them replace or are alternatives to the ones I've presented here.

After the break are several fun and helpful videos:


Repinicado, alternating, "Vila Isabel". I'm not sure if this guy is the greatest caixa player on Earth, but you can sure hear the tripteenth thing at work: