The DNA of swing drumming 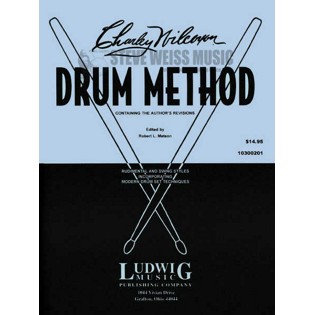 I picked up this interesting book- Charley Wilcoxon's Drum Method- as one of my local sheet music stores was going out of business. I'd been working with Wilcoxon's more advanced Rudimental Swing Solos, but this seems to be the true key book (as far as a book can take you) for understanding pre-modern jazz drumming.

The emphasis here is on rudiments and syncopated phrases, in the the 30's swing drumming mode, before before four-way coordination, and before use of the ride cymbal and hi-hat were universal. The approach to rudiments is different than in traditional military-style drumming, as in Haskell Harr

. Even the march-like etudes have a distinctly swinging feel absent from the other style.

Most of the book deals with quarter and 8th notes in 4/4 and cut time, plus 3/4 and 6/8. Syncopated and even meter-within-meter rhythms and accent patterns are introduced early, in the quarter note section, and exercises generally have a swing lilt. Remarkably, 16th notes in #/4 meters are not fully explored until page 91. Notably absent are the mathematical/logical sequences of exercises that became a primary feature of many drum books after George L. Stone's Stick Control

. Often sequences of exercises will be related by embellishments, or sticking variations as in the single page of 16th note exercises, which shows the unadorned rhythm, then several sticking, accent, embellishment options. Usually they just follow a musically-related progression.

It's somewhat easy to miss the fact that this is a drum set method book. The bass drum is used simply throughout, playing either quarter notes or half notes, and occasionally filling in breaks or supporting an accent pattern in the hands. Aside from a few dedicated hihat exercises, most of the book uses only the bass drum and hands. Jazz ride cymbal and hi-hat patterns are presented as stand-alone time feels, with no comping in the modern Kenny Clarke/Max Roach/Chapin

mode. Brushes are mentioned, to introduce the left hand sweep, and to mention that "brush technique is usually developed individually by each drummer." There are a number of multi-voice exercises and etudes using tom toms and cowbell.

I've found it to be very useful in my own practice- I'm very fond of the pages of two bar breaks, "rhumba studies", 3/8 studies, 16th notes, and triplet/8th note combinations. Along with several of the later etudes, which are less dense and more focused on a single idea than those from Wilcoxon's other books. And it's nice to see earlier versions of the the type of phrases used in more modern books, like Ted Reed's Syncopation

. The history lesson plus the dozen or so pages I actually use make it well worth the purchase price.

Purchase the Wilcoxon Drum Method.
Todd Bishop at 10:48 AM
Share