That does it- I may just switch over to an all-transcription blog- it probably took me less time to do this transcription than it will take to write an intro that doesn't make me sound like an idiot. The tune, Morpheus, from Miles Davis & Horns, was mentioned by drummer Alvin Fielder  (I'll be posting a sizable excerpt of that great interview later) as an early example of free time ("Roy's playing all across the bar lines, the first really free drumming I'd heard."). That doesn't quite seem to be the case- I think that effect is actually an experimental arranging move by John Lewis- during the early part of the tune Haynes plays a 3/8 pattern over a 3/4 bass vamp, which continues as the horns go into a fast four, making it sound like he's in his own time zone.

The break I've transcribed is fun, and kind of odd for all the quarter notes: 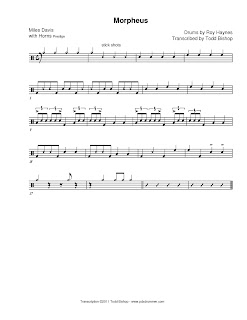