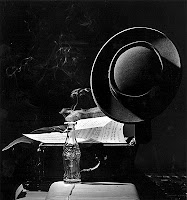 In his 2008 interview by Marc Myers at JazzWax, Roy Haynes talks about Lester Young and his reaction to Roy's first 20" bass drum:


Roy Haynes: [Lester] was a very humorous guy. He had his own way of talking. It was like a foreign language and unless you understood it, what he said would make little sense to you. You had to pick up on his special way of putting things to know what he meant. Sometimes you wouldn’t even know what the hell he was talking about. Thelonious Monk sort of reminded me of Lester. They both had their own way of talking.

Back then, there were people playing jazz who were so original, even more so than everyone else who played it, you know. They developed different ways of communicating in the different parts of the ghettos we lived in and hung out in. There were a lot of exceptional people and musicians in the neighborhoods who never got credit. You've never heard of them and they're all but forgotten. Lester Young was one of those special people you did hear about. But you had to have a little imagination about a lot of things to get where he was coming from.

RH: I told this story to Miles back in the 1940s, and he got a kick out of it. During the period when I first came to New York, the standard size of a bass drum was 26 inches. So when I joined Lester Young in 1947, I still had that size bass drum. But it was stolen the day before or on the same day we were supposed to go to California by way of Chicago. So when I got to Chicago, Max Roach [pictured] was there. He told me there was a guy in town from Ludwig drums. Max said he'd introduce me to him. So I met the guy, and went to the factory, which was on the north side of Chicago. Joe Harris, a drummer from Pittsburgh, went with me that day. The drum I got that day was one of the first smaller, 20-inch bass drums.

JW: Was there something wrong with it?

RH: No, not at all. It was just smaller and had a slightly tighter sound. When I got the bass drum back to the Hotel Pershing [pictured below], where I was staying in Chicago, Lester took a look at it and without missing a beat nicknamed it "Princess Wee-Wee." Everything Lester Young named had a female connection, like Lady Day for Billie Holiday. He had that kind of fast mind. "Princess" was a name of affection for him. "Wee-Wee" was small, you know? It was quick. The man had a special kind of genius but you had to understand his way of thinking to get him and appreciate his way of thinking. Miles [Davis] and Max [Roach] came by the hotel before we left. They were in town the same day with Charlie Parker, who had just gotten fired for something at some club. When I told them the name Prez had come up with for the drum, they laughed because the name was so perfect.