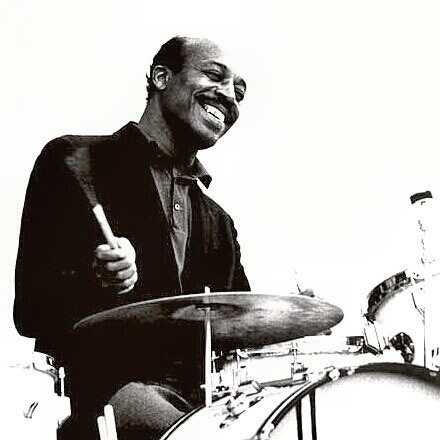 I stumbled across this piece about Papa Jo Jones late in his career, at Michael Steinman's Jazz Lives. Steinman was able to speak to Jones and see him perform a number of times during that period, and has some interesting stories and insights:

[...] In person, Jo was animated, inscrutable, vehement. Something in his manner and approach defied easy explanation. It felt as if we were speaking to a character in a play — and only Jo had the script. There was also some element of unpredictability, even of danger, as if he might suddenly get furious at you in the middle of a conversation, as I saw happen with Ruby Braff.

(Ruby, incidentally, told us a wonderful story about working with Jo at Storyville, almost twenty years earlier: Jo would never say, “Let’s play ROSETTA,” but start a rhythmic pattern and tempo on his hi-hat or snare and leave it up to the musician to guess which tune might best go with that tempo. Ruby shook his head in disbelief when he recalled, somewhat in desperation, picking some song that he thought might be fine at that tempo, and Jo saying, “That’s it! You got it!” as if Ruby had telepathically found the answer. “I don’t play with him any more. He’s nuts,” said Ruby.)

Even when speaking to people he knew and liked, Jo had a particular tone of voice that in someone else might have been ironic verging on contemptuous. But with him it was a form of emphasis. You could hear capital letters, boldface, italics in his voice. And he had a fierce energy in his speech: a conversation with him was like being strapped into a centrifuge, an untiring monologue, rising and falling.

Spotting Jo at Ippolito’s, I imagine that we introduced ourselves as jazz listeners, fans, admirers. And then one of us asked Jo where we could hear him play. Was he gigging anywhere?

He looked at us with weary resignation, two innocent Caucasian college boys who had asked a silly question.

“I’m re-ti-red,” he said, by way of explanation. “I don’t play the drums anymore. Leave all that to the kiddies,” he continued. We couldn’t believe it, and asked him again. He wasn’t playing any gigs, no festivals? All he would say was that he was “re-ti-red.“ If we needed a drummer, he suggested that we call Buddy Rich. [...]

The sequel to all this is that some months later we saw Jo’s name prominently advertised as one of the musicians who would appear in the Newport-New York Jazz Festival. [...]

Jo could play magically in clubs[...] I remember going to Gregory’s, a tiny room, to hear Ellis Larkins and Al Hall. That duo played splendid embroidered jazz for one set and then Jo walked in, unfurled his newspaper, took out a set of folding wire brushes, spread the paper on a chair, and played with elegance, amusement, and grace.

At the West End Cafe, thanks to Phil Schaap, Jo had a fairly steady gig: “Jo Jones and Friends,” which was most often a quartet of Harold Ashby on tenor, a pianist (sometimes Don Coates), and bassist John Ore, who had played with Monk. One rainy night in particular stands out. It was time for the band to begin and Ore had not arrived. Jo began his sets with a medium-tempo blues in G, and, muttering to himself, he set the tempo by tapping his snare drum with his fingers. Ashby soloed; the pianist soloed, and when it came to the two or four choruses that would have been taken by Ore, Jo grimaced, muttered loudly and incomprehensibly to himself, and played choruses of accompaniment — as if Ore had been there — with the tenor and piano silent. It was mildly eerie. Ore came in soon after, apologized for being late (he lived in Brooklyn), but it took the rest of the night for Jo to become calmer.

But he could be politely accessible to fans. I recall approaching him at the West End, before the gig had started, with a new vinyl copy of a record, FOR BASIE. I had bought it that afternoon and hoped that Jo would autograph it for me. [...] The cover picture showed Jo in a heavy flannel buffalo-plaid shirt with wide suspenders over it, and he grew animated and showed the other musicians at the table. “See that?” he demanded of them. “That is style!” he insisted, happily. And he autographed the back side of the cover in a large ornate hand. When he was through signing, he said to me that he had never heard the music. I could take a hint, and offered him this copy (I had another at home). I hope that it gave him pleasure.

At another, later West End gig, I had with me a new record, OUR MAN, PAPA JO! — on the Denon label, which had a picture of Jo in full glower at his drum set, on the cover. Thinking that one can never have too many Jo Jones signatures, I asked him to autograph this one also. He stared at the cover, held it at arm’s length.

“This will keep the burglars from your house!” he gleefully told me.

Visit Jazz Lives to read the entire piece.
Todd Bishop at 10:24 AM
Share