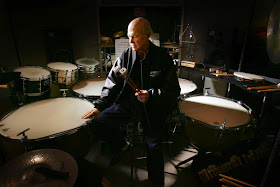 Here are some choice quotes from my old percussion professor at the University of Oregon, Charles Dowd, who died last year. He was a star pupil of Saul Goodman and Tony Cirone back in the day, has written several classic drum and percussion method books, and has taught many, many outstanding percussionists and drummers since the mid-1970's- you can't swing a cat in the pacific northwest without hitting an accomplished musician who came out of his program.

I had a contentious relationship with him, but he was a tremendous influence even so, shaping my concept of musicianship and professionalism before I even knew I wanted to be one- his students, including my older brother, were around me all the time from an early age.

These are as his students remembered him saying them, pulled from his memorial Facebook page:

Take the stick. Hit the marimba.

I'm from the Hit the Drum School.

Take your stick in your hand... and hit the drum.

Don't BANG, unless the composer writes in your part, right above the note, BANG!

Every note is a little pearl.

NO! VOICE your bass drum. Who's gonna hear THAT?


Who's gonna hear that? IT'S A SOLO 'p' so play it 'mf'. Play to the back row of the balcony. Don't look at me, look out there at the balcony.

I don't care if you use your fucking metal mallets. Just make a big fucking sound.

It's better to be sharp than to be OUT OF TUNE.

You need a dark German sound. Look at Brahms... look at that Beard. Brahms needs your DARKEST German Sound. How DARK can you get your GERMAN sound? You need to get your darkest German sound like.... the Nazis.

There's NO SUCH THING AS AN EASY PART!!!

You're NOT DRUMMERS. You're not even PERCUSSIONISTS. YOU'RE MUSICIANS!

My Grandfather said, "I went to war, so my son could go into business, so that my grandson could study art and music."

It's NOT a SONG! SONGS have WORDS!

You can't have first note-itis.

Never be late for a gig. You will arrive, and it will be on the 7th floor, and the elevator will be broken.

One time Tony (Cirone) didn't check his ties and a cymbal flew off and almost KILLED the concert master.

GET PAID FOR THE SCHLEP... GET THE GIG... and always PLAY WELL!