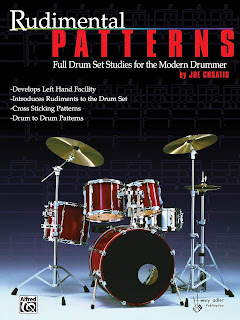 This book contains most of what I always felt was wrong with the traditional approach to learning the drums, and I LIKE IT. In learning to play, I always looked for ways to multiply my practice efforts: I wanted things to work on several levels at once- reading, hand technique, four-way coordination, orchestration on the fly, musical interpretation. As many things as I could fit in, I would. Things like pure calistenics and pre-packaged licks (especially out of that traditional Krupa-like bag) were verboten. If it could not be learned through a quasi-musical application, I didn't want to do it.

What I found in working through this book (and a few others like it) is that not only do calisthenics actually work, well, maybe they're necessary. At the very least they're better for isolating a move and learning it completely and quickly— which is difficult when you're dealing with several issues at once. By doing that I was creating a sort of Darwinian process, where some moves got unconsciously weeded out of my playing through never having been learned thoroughly. So it is worth it to address them directly with some calisthenic exercises as in this book.

Many of the licks in the book are clichés, and will be instantly recognizable if you're at all familiar with the more “drummery” rock drummers of the 60's— your Ian Paices and Ron Bushys— or with the legion of Krupa-influenced show drummers of that era. But I find I actually prefer doing my calisthenics in the context of clichés rather than in the nearly content-free, purely logical/mechanical mode of some newer books (Rod Morgenstein's Drum Set Warm-Ups comes to mind)— I'm learning the moves and learning history at the same time. Learning these old licks has not caused me to start regurgitating them verbatim, so far.

I'm not wild about the archaic notation system, a relic of a time when there was no standardized drum staff, and lot of drummers could barely read anyway. It's difficult for others to read quickly. A minor complaint.

A recommended book for mainly for jazz students— artist types like me will appreciate it filling in some technical and historical gaps, and novices will appreciate someone giving them some stock ideas to play.